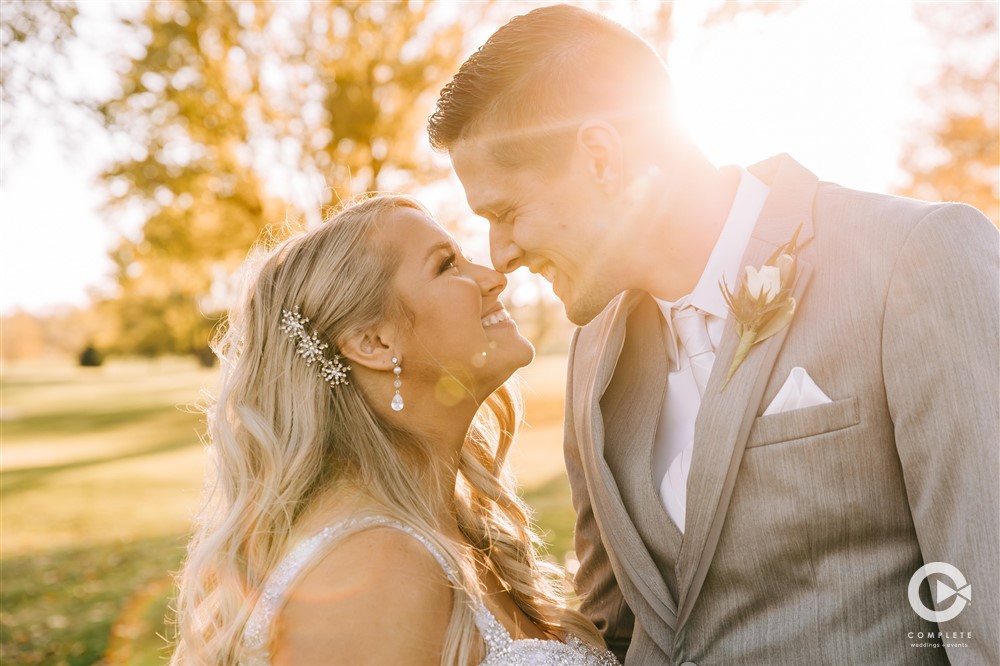 On an early winter morning, Taylor + Tyson were set to wed at the Lincoln Berean Chuch. Their wedding day was a culmination of their romance and all the moments that led to this day. It was a perfect day filled with notes of winter wonderland dreams, hope for the future, and of course, love. 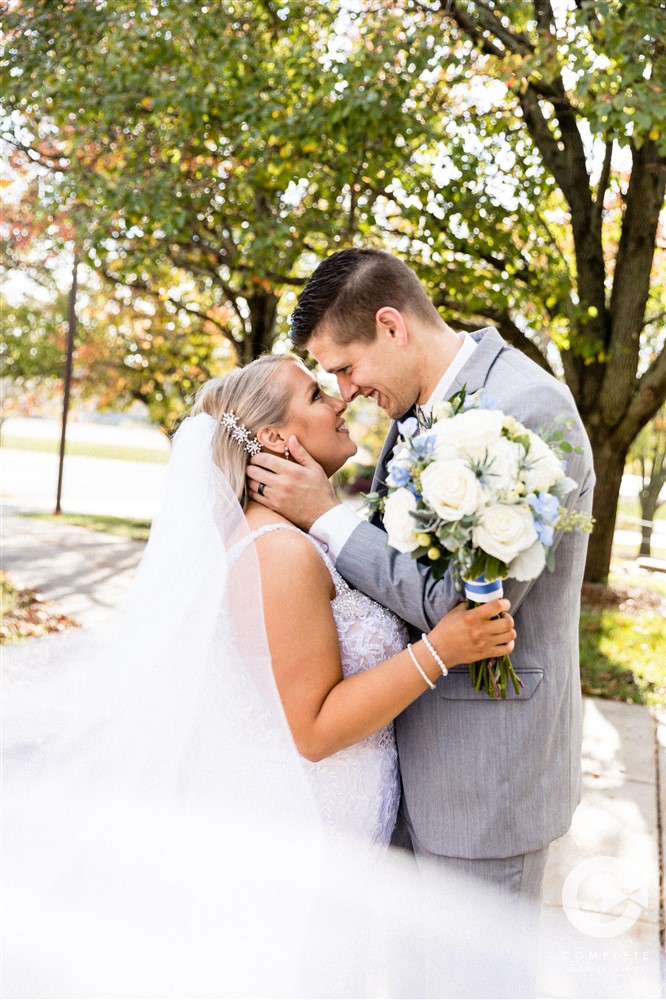 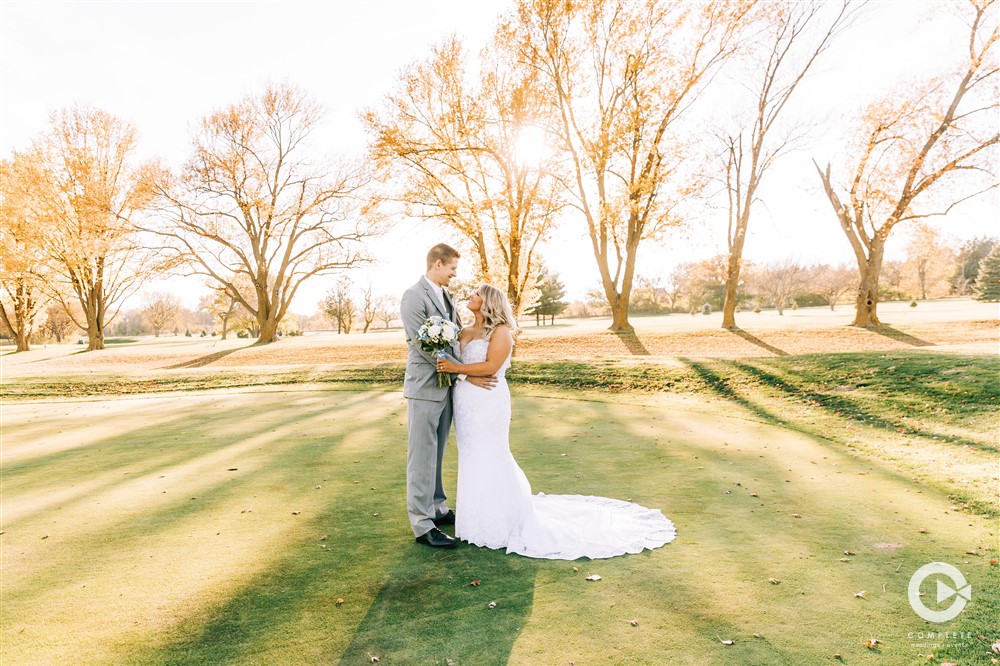 First, the bride and groom began the day by meeting at the church and getting ready in separate rooms. Once Taylor was ready, she went outside to meet the three most important men in her life (not including her future husband.

Taylor walked out into the tree-surrounded area where she met them. She wore a trumpet-style dress. It was a fitted lace dress that subtly flared out into the trail. On the back were buttons that went down her back. Each of them looked at Taylor and was proud of the woman she had become. There she was, all grown up and going out into the world. It was now up to Tyson to fill the role of being the man who would be there for her in all her best and worst times.

Speaking of Tyson, once the first looks were complete, the bride and groom were ready to give each other their letters. Each letter detailed how much they both loved each other and were looking forward to the day ahead. Paired with the letters were gifts to the other. It was a  sweet moment to get them prepared for the day ahead. 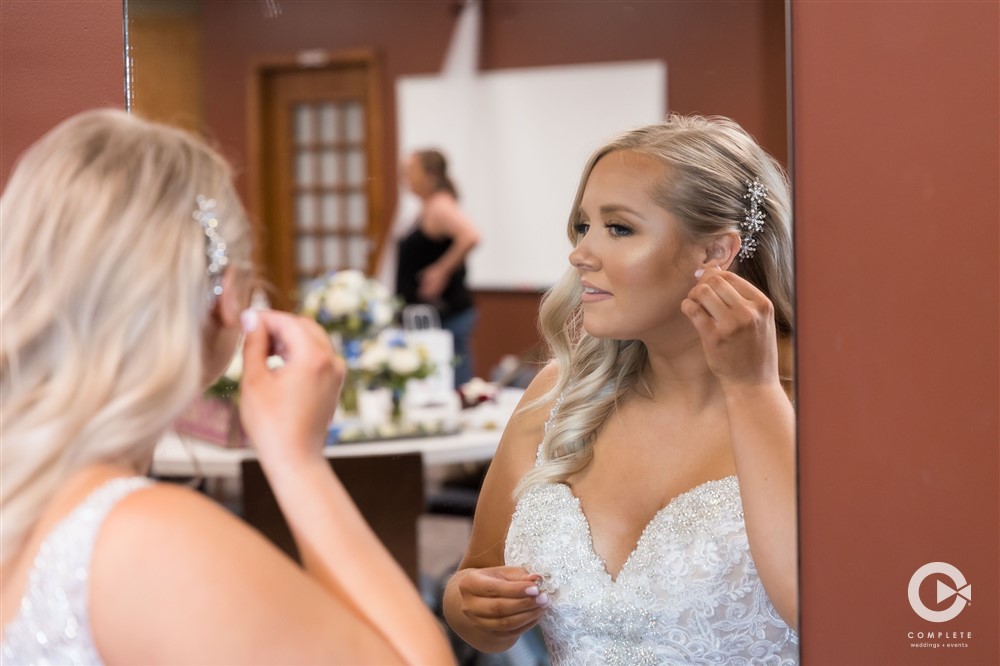 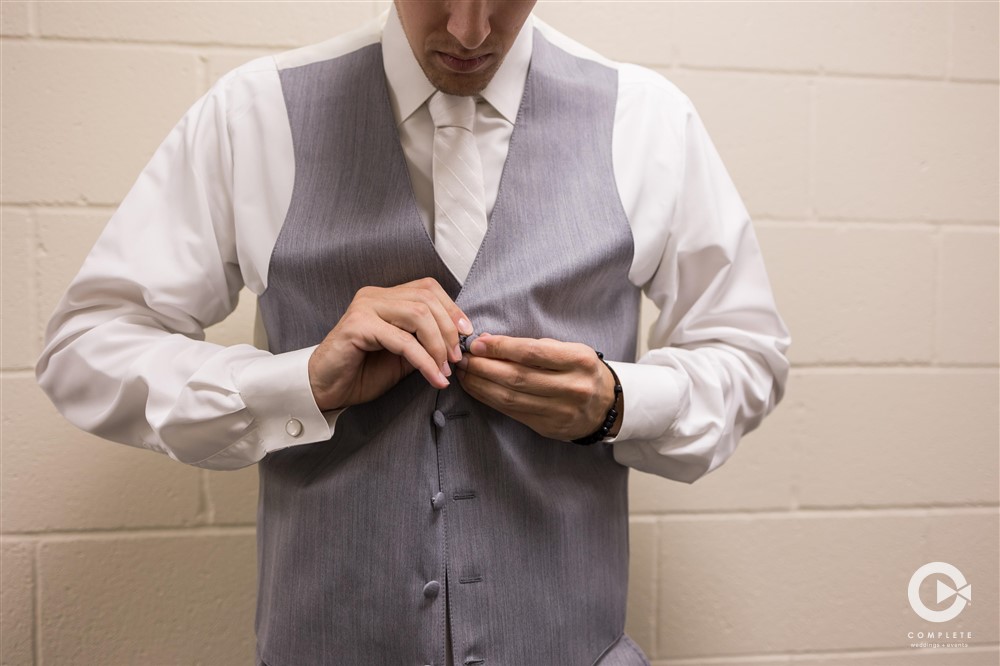 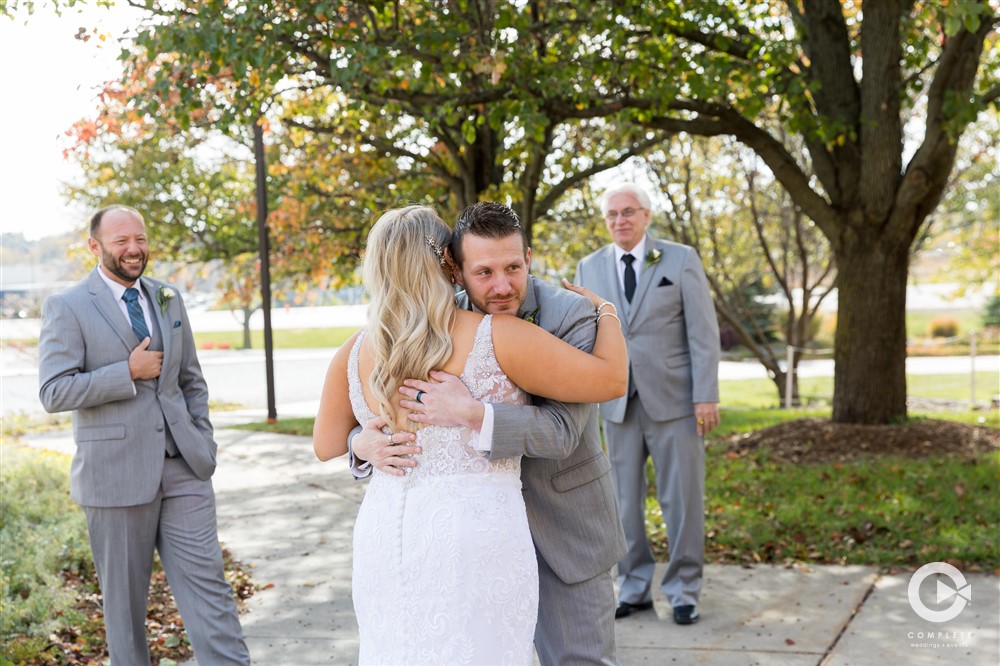 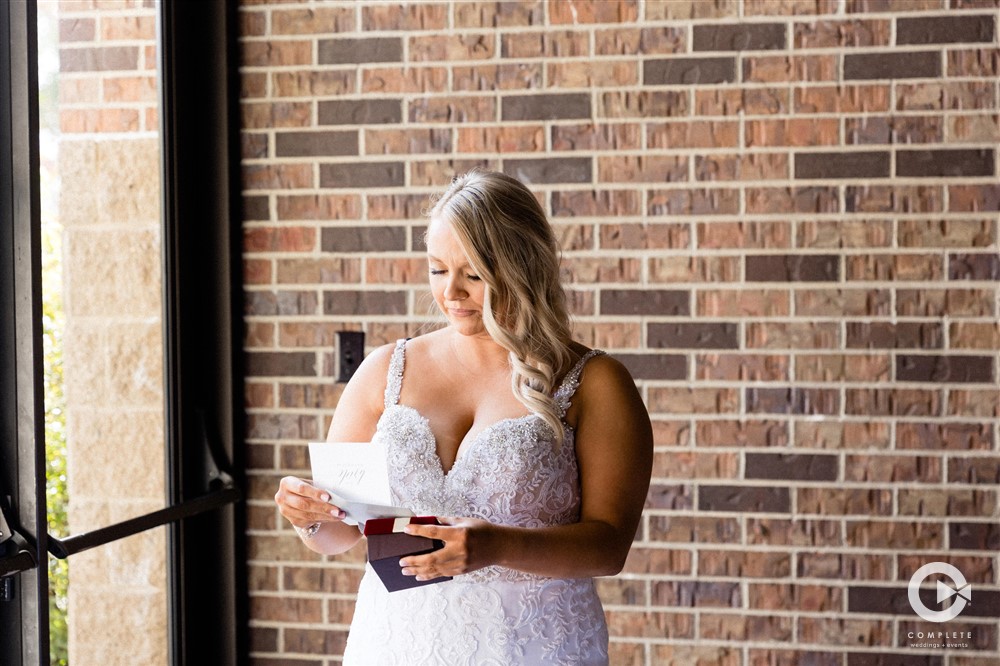 Next on the day’s events was the ceremony. Guests trickled into the Lincoln Berean Church and sat on opposite sides of the aisle. Once they had all arrived, the ceremony was ready to begin. Music began playing, signaling the start of the processional. The bridesmaids in blue and the groomsmen in grey made their way down the aisle in pairs. Finally, Taylor stepped out onto the aisle with her dad in hand.

She looked up and saw Tyson at the end of the aisle. There he was, the man of her dreams. He wore a classic grey suit, paired with a white button-down, white tie, and handkerchief. All amounting to a timeless groom. They held hands at the top of the stairs to begin their vows. Promises were made and vows were exchanged, all sealed with a kiss. The two were finally husband and wife. 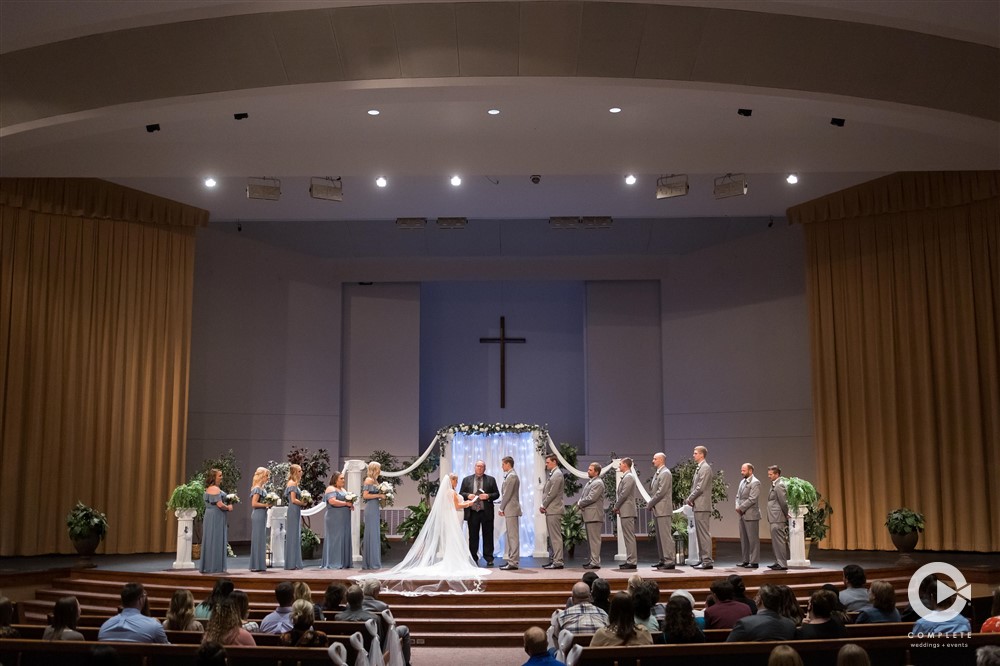 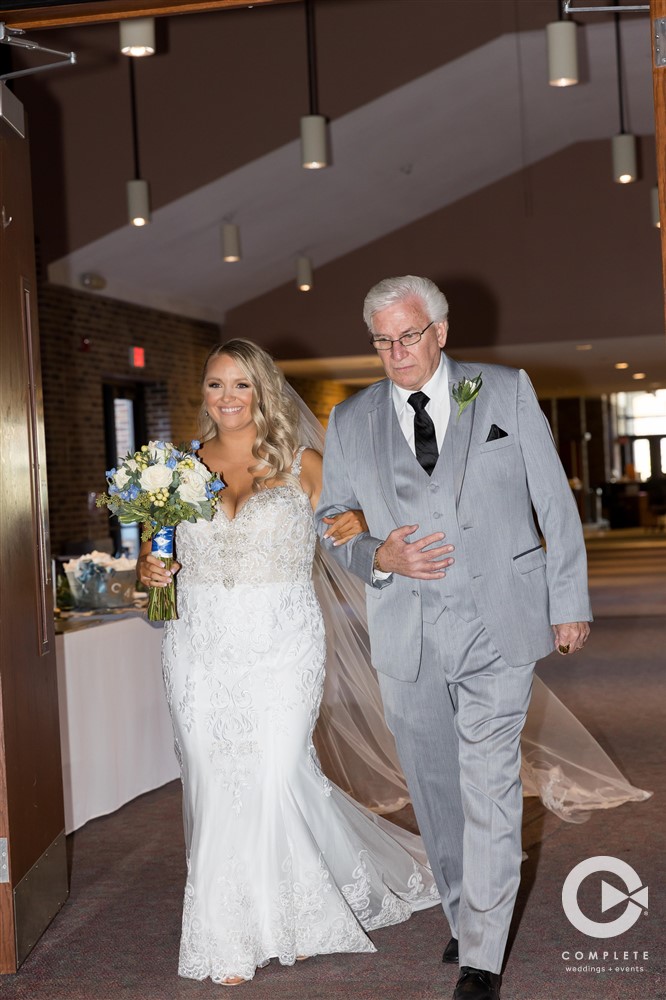 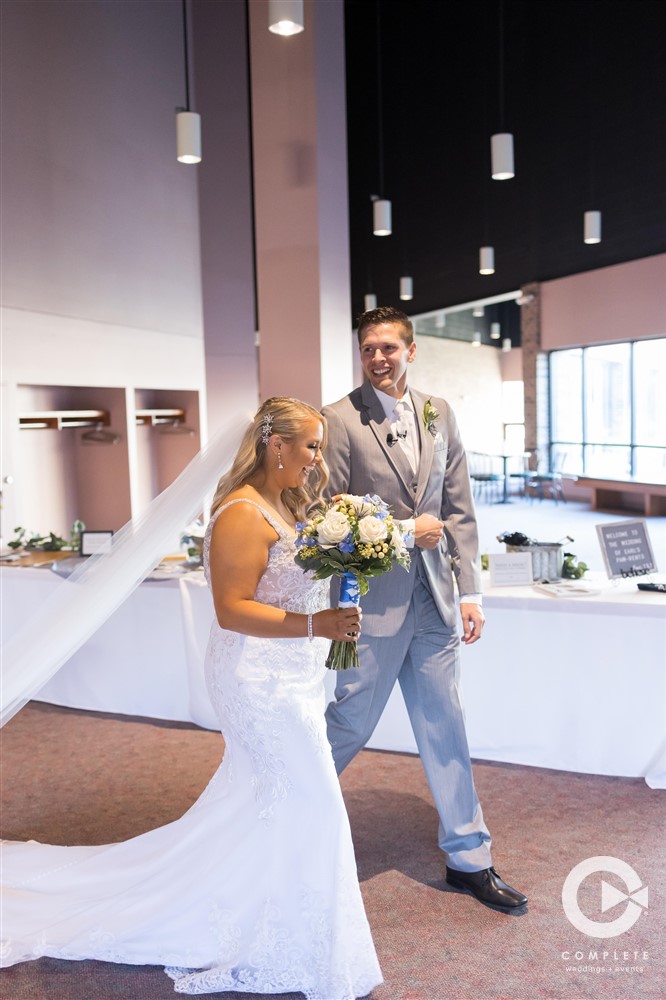 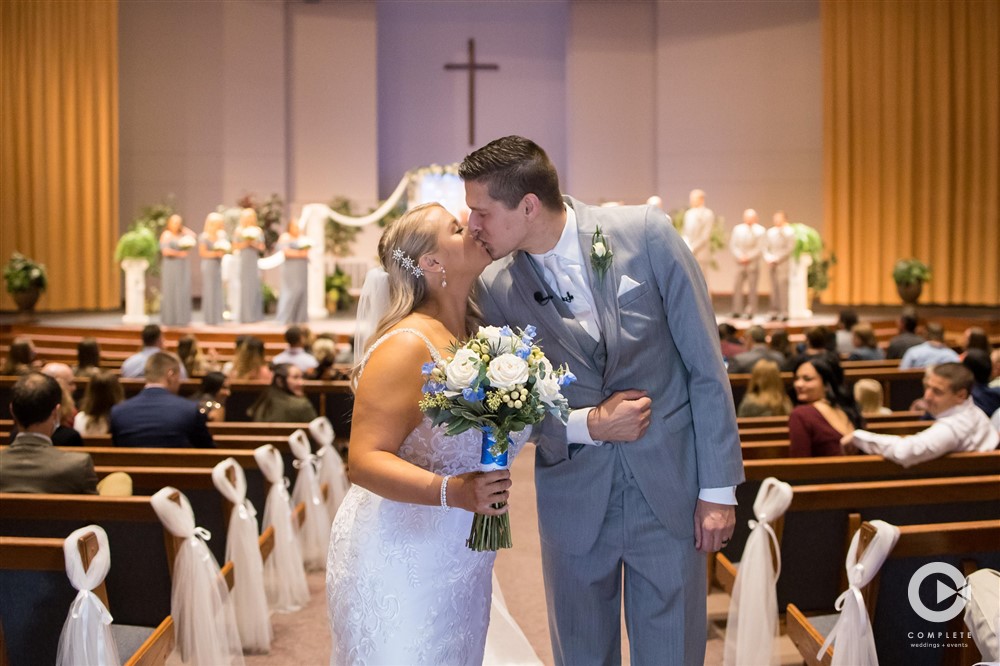 With the new union of the two families, they were all ready to celebrate! The party moved on over to the Hidden Valley Golf Course! A stunning venue filled with greenery landscapes and perfect indoor space. The venue was decorated in shades of blues, whites, and greenery. The mixture of uplights and color palette made for the perfect winter wonderland. 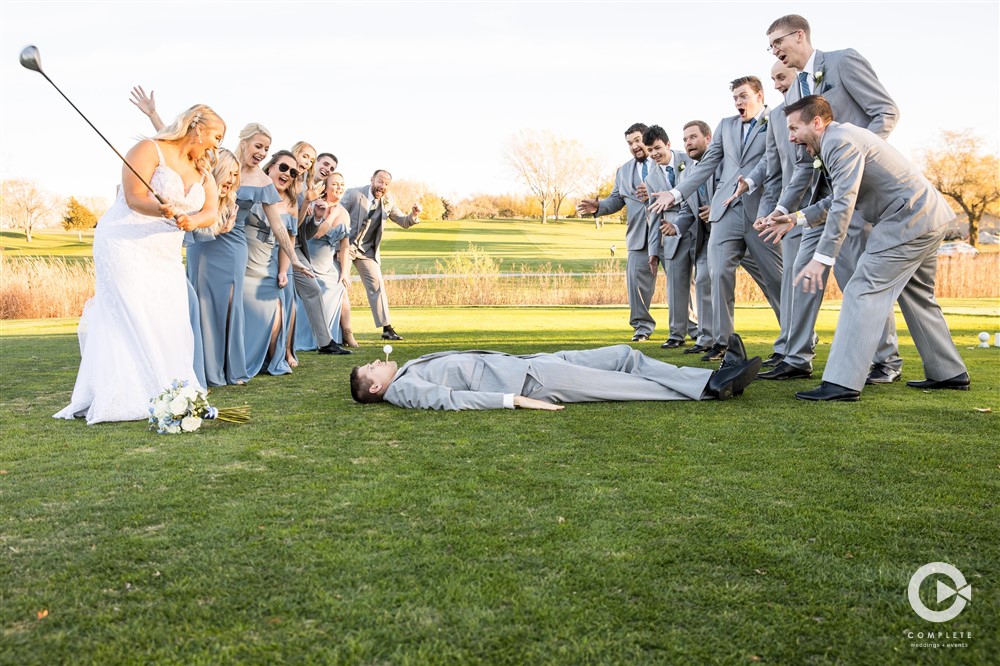 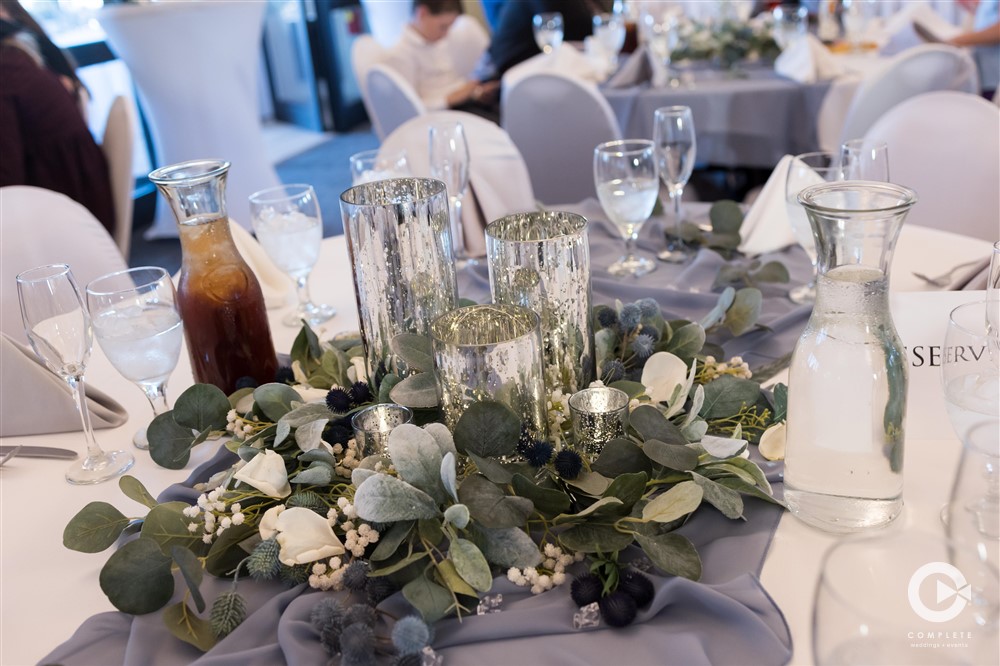 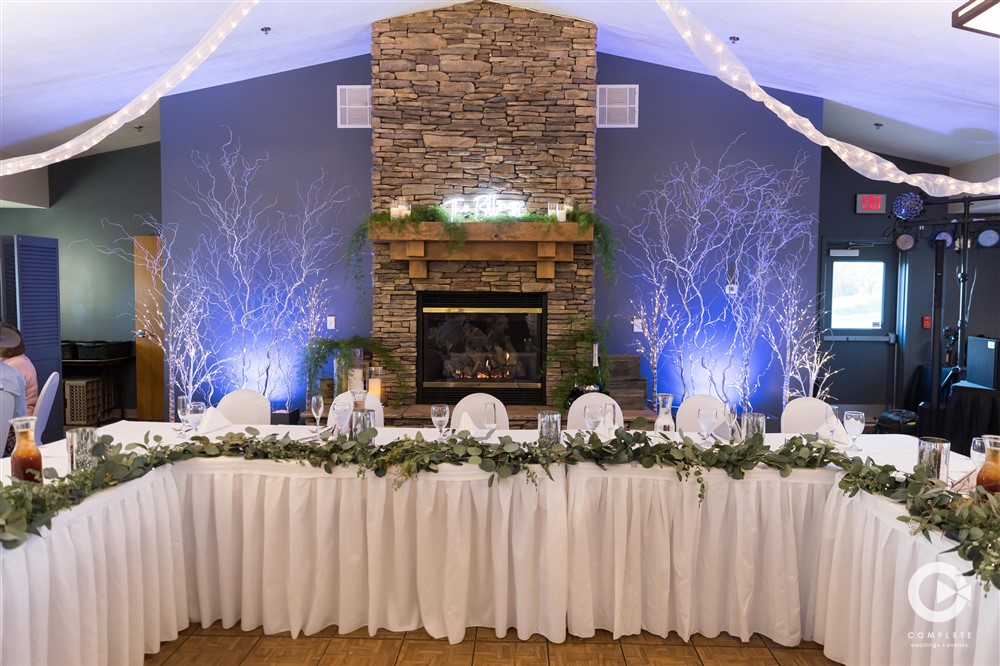 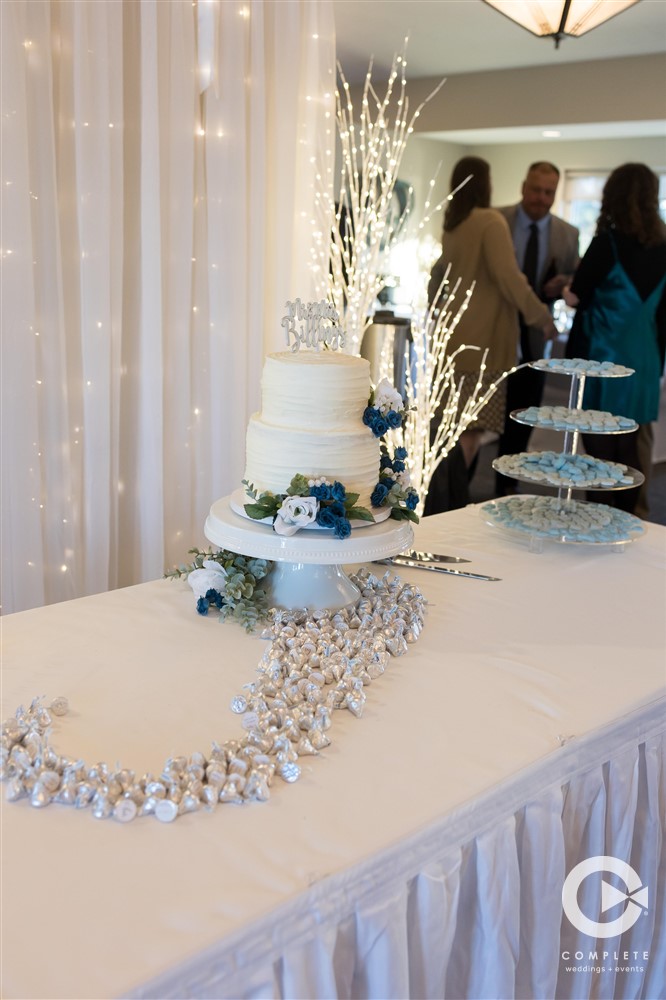 Lastly, it was party time! Once cocktail hour was done, the wedding party made its way into the venue. Each with a dance of their own, they got everyone excited for Taylor + Tyson. The newly wedded couple ran into the reception area with a new wave of excitement! The two made their way to their head table. The night continued on with toasts and speeches, cake cutting, and some dancing! It was the perfect way to begin the newest chapter of Taylor + Tyson’s relationship. 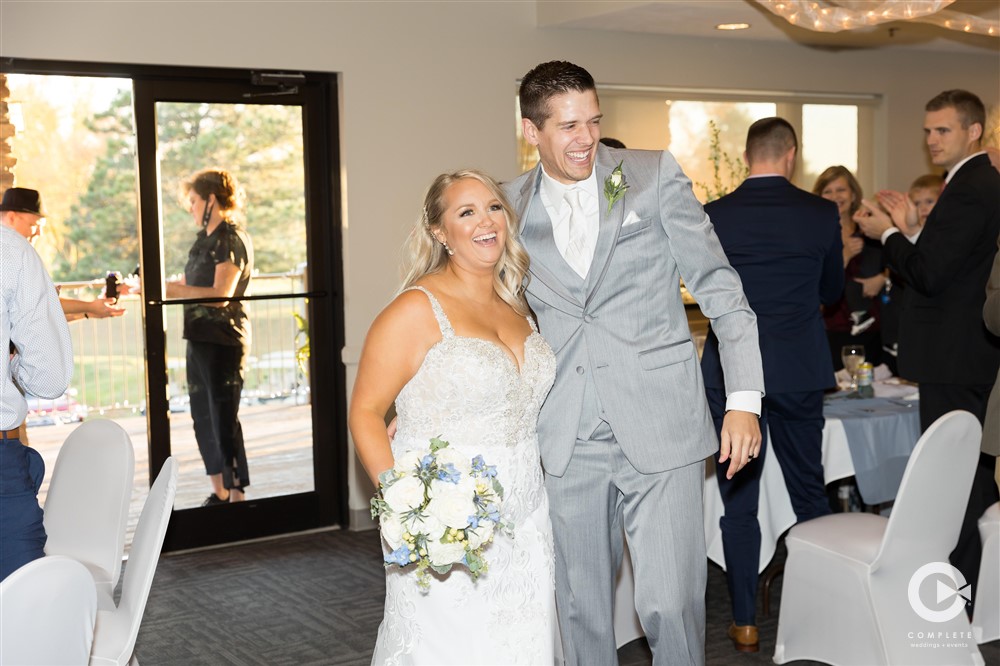 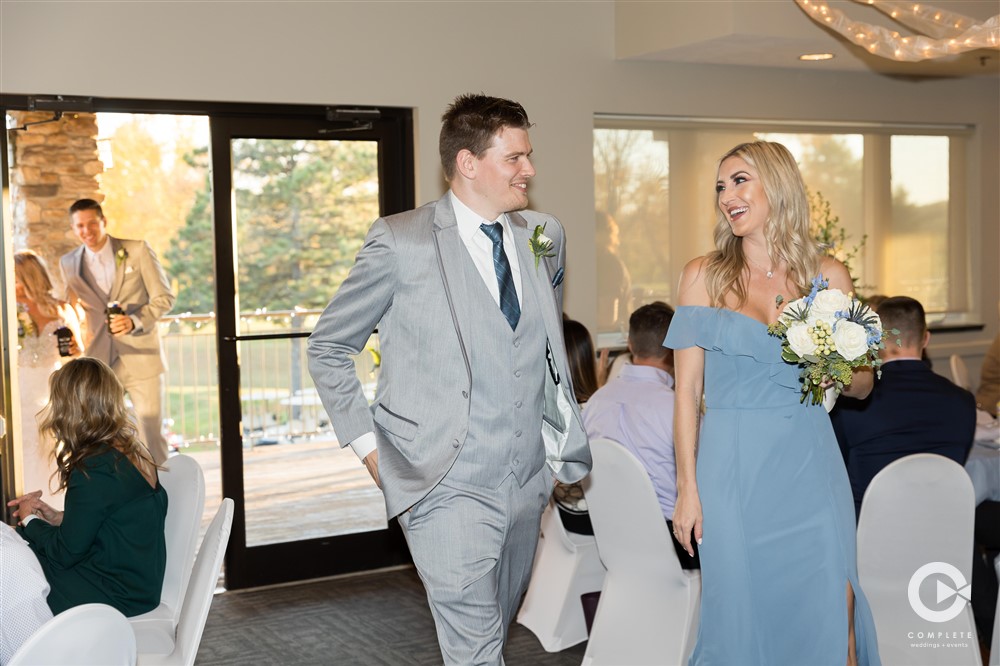 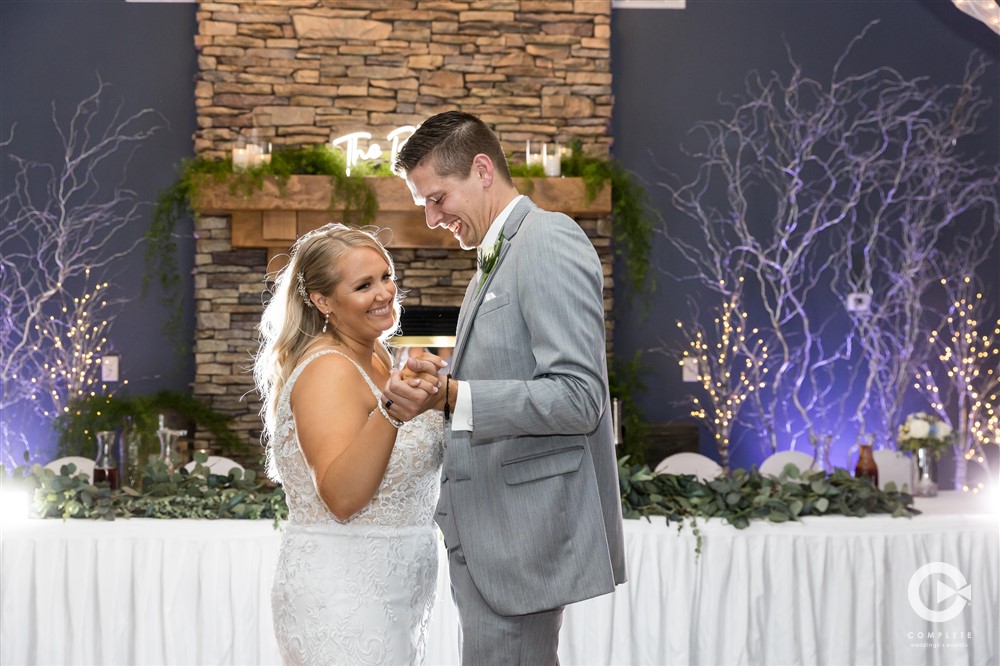 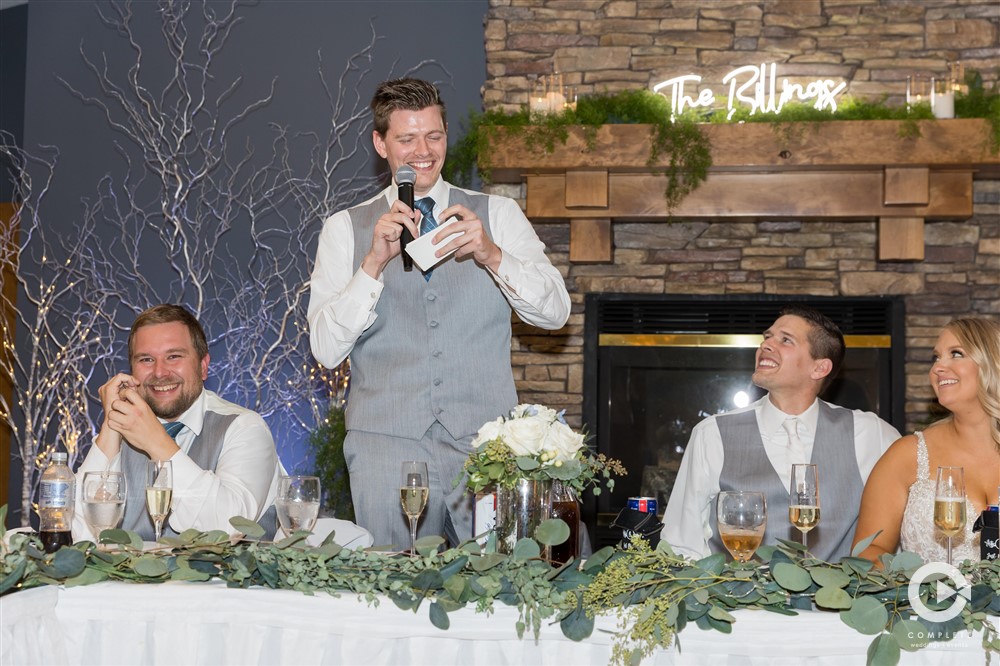 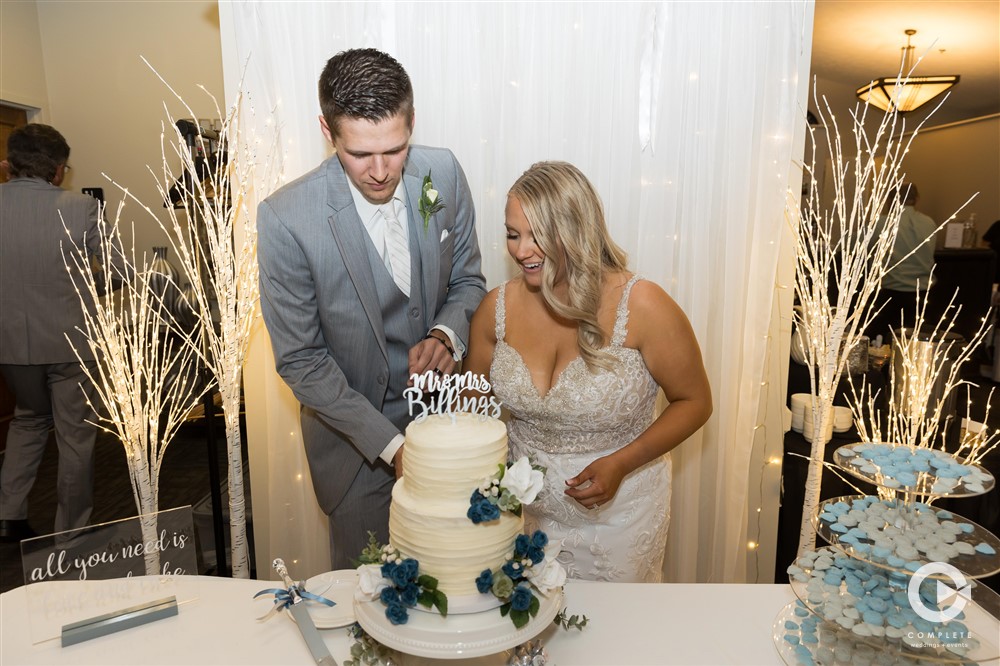 If you’re still looking to make your wedding day complete like Taylor + Tyson, book your services with Complete Weddings + Events in Lincoln! We offer DJ, Photo, Video, Photo Booth, and Day of Coordination! Contact us to receive pricing.

Why Have An Engagement Session?