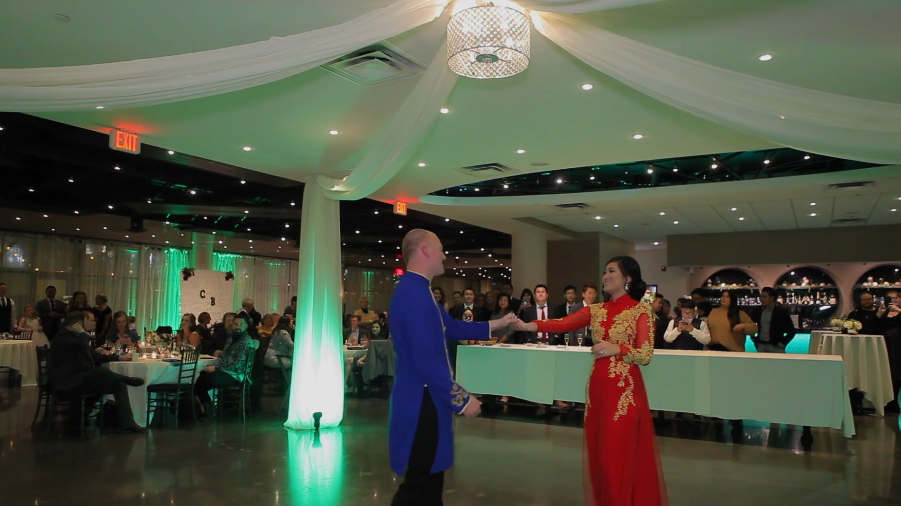 This winter wedding is full of bold colors, formal fashion, and a lively wedding party. Christina and Brent officially become Mr. and Mrs. Howard in November at the Church of the Ascension in Overland Park.

Despite graduating from rival colleges, (catch the dance floor drama six and half minutes into the video below), their personalities complement each other perfectly. As you’ll hear in one of the speeches, “opposites do attract!” Brent’s shy demeanor and Christina’s bubbly personality make a great duo, and the two dated after meeting at work. Brent proposed in the gardens of the Palace of Versailles (epic right!?) on a spring European trip.

The couple’s reception at The Venue in Leawood included an additional get-up for the groom and bride. The couple changed into traditional Vietnamese wedding outfits, áo dàis, which are typically silk tunics and a national garment in Vietnam. You’ll see Christina in red and Brent in blue, both with gold appliqués and accents.

The bridesmaid wore matching blue sage dresses, the same color as the groomsmen’s ties. Maroon flowers were sprinkled in both the wedding party’s bouquet and boutonnieres.

The couples’ siblings and members of the wedding party gave a heartfelt speech that will have anyone with a sister or brother laughing and tearing up! Take a tip from Christina hereto not forget to breathe and look up to avoid tear-streaked makeup when you’re dressed up for your big day or a fancy event.

Watch it all up into the glow stick exit in their wedding day recap captured by the team at Complete Weddings + Events.

Find more Complete Weddings + Events wedding videos on our YouTube channel or on our videography portfolio!

How to Pick a Wedding Date in Kansas City

My Friend’s Wedding was Cancelled… What should I do?